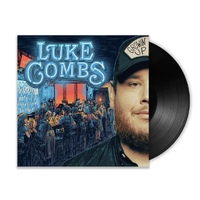 Growin’ Up is the third studio album by American country singer songwriter Luke Combs, released in June 2022 via River House and Columbia Records.

Growin’ Up was produced by Combs, Chip Matthews and Jonathan Singleton and is his third studio album following 2019’s Platinum What You See is What You Get and his Platinum debut, This One’s For You.

The album includes the singles "Doin' This", "The Kind of Love We Make" and "Going, Going, Gone".

This album is on black vinyl housed in a gatefold sleeve, pressed in Europe via Columbia Records.