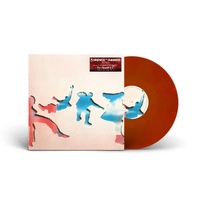 This album is a limited edition on brick red coloured vinyl housed in a gatefold sleeve with a printed inner sleeve and printed insert, pressed in the US via BMG.