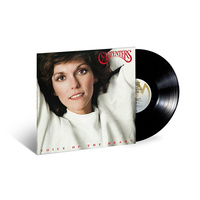 Voice Of The Heart is the eleventh studio album by American pop duo Carpenters, originally released in October 1983 via A&M Records.

Voice Of The Heart was released in 1983 after Karen's death in February of that year, and contains the two songs from her final recording sessions, "Now" and "You're Enough", as well as previously unreleased tracks from sessions over the years.

Karen's last recording, "Now", was completed in April 1982 while Karen was taking a break from medical treatment in New York and had temporarily returned to California. The song was recorded in one take.

The album was compiled by Richard Carpenter. Two singles were released, "Make Believe It's Your First Time", a second version of a song Karen had recorded for her solo album, and "Your Baby Doesn't Love You Anymore".

Check out the tracks:  “Make Believe It's Your First Time”; “Your Baby Doesn't Love You Anymore”; “Now”; and “You’re Enough”.