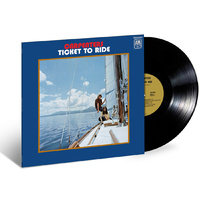 Ticket To Ride is the debut studio album by American pop duo Carpenters, originally released in October 1969 via A&M Records.

In April 1969 Richard and Karen Carpenter signed to A&M Records and were given free creative reign in the studio to create music in their own style. Jack Daugherty, who had been instrumental in connecting the Carpenters with Herb Alpert, was suggested by the label to produce their album. However Richard Carpenter was probably the de-facto producer in reality.

The album contains ten original songs composed by Richard Carpenter with lyricist John Bettis and the lead vocals are shared more or less evenly between Karen and Richard. This album is also notable for Karen’s drum playing, which is featured on all the album tracks. She also played bass on two tracks "All of My Life" and "Eve". Seasoned session musician (and Wrecking Crew member) Joe Osborn played bass on the album, and would continue to work with them during their career.

The band chose to cover The Beatles “Ticket To Ride” song, and turn it into a ballad with a slower tempo arrangement. This was issued as a single in November 1969 and became a minor hit for the band in the US reaching #54 on the Billboard Hot 100 Singles chart.

Ticket To Ride is one of the Carpenters most interesting albums, as it contains a range of interests and sounds that were modified or abandoned on subsequent albums. The lushly orchestrated "Someday" is a brilliant showcase for Richard's arranging skills and the most dramatic side of Karen's voice.

The album was initially released with the title Offering and sold only 18,000 copies on its initial run, at a loss to A&M Records. After the Carpenters second album Close To You (1970) broke them into the charts and internationally, the album was re-titled Ticket To Ride and sold more than 250,000 copies.