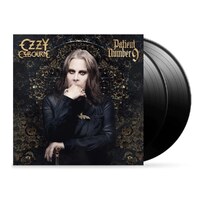 The record boasts guitarists Jeff Beck, Eric Clapton, Mike McCready of Pearl Jam, and longstanding righthand man and six-string beast Zakk Wylde who plays on the majority of the tracks.

For the bulk of the album, Chad Smith of Red Hot Chili Peppers held down drums, while the late Taylor Hawkins of Foo Fighters made an appearance.

Old friend and one-time Ozzy band member Robert Trujillo of Metallica plays bass on most of the album's tracks, with Duff McKagan of Guns N' Roses and Chris Chaney of Jane's Addiction supplying bass on a few songs.

For the first time ever, Black Sabbath co-founder, guitarist, and riff- lord Tony Iommi appears on an Ozzy solo album.

The album was produced by Andrew Watt and continues his career resurgence following Ordinary Man released in 2020.

This double album 2LP record set is on black vinyl housed in a single pocket sleeve with a printed insert, pressed in Europe via Epic Records.