Diary Of A Madman is a classic rock record in every way - monster guitars, Ozzy’s eerie, wailing vocals, riffs so massive they slap you round the face, and underpinning it all, pounding drum beats.

The songs may be in the classic rock mould, but they are lifted out of the ordinary by the legendary rock axe God, Randy Rhoads. Diary Of A Madman was the last record he played on before his death while on tour with Ozzy, and his huge guitar sound is all over the record with power riffs and extended guitar solos crammed in at every opportunity.

Title track, "Diary Of A Madman", combines strings with a minor key riff, creating a memorable slice of rock that is over-the-top in all the right ways. Rock ballad "Tonight" provides a welcome change and "You Can’t Kill Rock And Roll" is a real stand-out track. "Flying High Again" has an almost-bluesy feel, and album-opener “Over The Mountain” sets the tone for the fast-paced, straight-forward rock on this album.

It might be a conventional rock record, but the thudderingly raucous guitars and the strangely ethereal and creepy vocals mean that it pushes all the right buttons. This is essential Ozzy.

This album is a limited edition 2021 reissue on red & black swirl coloured vinyl with a printed inner sleeve, pressed in Europe via Jet Records. 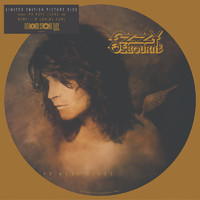