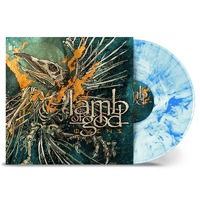 The Grammy-nominated Lamb Of God follow 2020's self-titled slab with a vicious new testament. Riding high on an insatiable drive, a focused collective camaraderie, and a creative renaissance saluted by the likes of Rolling Stone and NME, Lamb Of God returned to long-time producer Josh Wilbur (Megadeth, Korn, Avenged Sevenfold) and carved the gloriously unhinged ‘Omens’ into sonic stone.

Densely muscular, soaked in unnerving spite, with a pessimistic eye toward inner struggles and global affairs alike, ‘Omens’ is a furious entry in the catalogue.

This album is a limited edition on white and sky blue marbled coloured vinyl housed in a gatefold sleeve, pressed in Germany via Nuclear Blast.