Following a two-year-long world tour in promotion of their third album Smother (2011), the band admitted to feelings of burn out by the experience and in late 2012 announced that they would take a year off from touring to concentrate on writing and recording a follow-up album.

Seeking a fresh approach, the band chose not to work with long-time producer Richard Formby, who had helmed the recording of Two Dancers (2009) and Smother (2011). Producers Leo Abrahams and Lexxx (who was also involved in the mixing of both records) were brought in to sharpen the band's focus and help them craft songs that continued to pursue the band's shift into electronic and synthesized sounds, yet with a more direct and aggressive feel in comparison to Smother.

The album Present Tense received critical acclaim from music critics. Heather Phares writing for Allmusic concludes:  “…As always, Wild Beasts have one of the finest indie songwriting duos in Thorpe and Flemming, whose styles still complement each other perfectly. Thorpe offers a more poetic interpretation of Present Tense's fascinations with loss and lust, particularly on the gorgeous "Sweet Spot," where he muses on the fleeting perfection "between two hands held in prayer" over sparkling guitars. Meanwhile, Flemming plays the heavy, with songs ranging from the somber "New Life" to the deeply unsettling "A Dog's Life," where lyrics like "Paint its lipstick bright red/Wipe the drool up gently" suggest misdeeds on a Silence of the Lambs level. His strongest moments are somewhere in between: "Nature Boy," which lumbers full of ominous masculinity, is equally cruel and alluring, while "Daughters" gives equal time to threatening femininity. Present Tense isn't as flawless as Smother; it's slightly top-loaded, and occasionally the spare instrumentation borders on monotonous. Still, it's a compelling album that shows Wild Beasts can build on their breakthrough in satisfying and challenging ways…”

Check out the tracks:  “Wanderlust”; “A Simple Beautiful Truth”; “Mecca”; and “Palace”.

This LP record is on 180 gram heavyweight vinyl housed in a gatefold sleeve with 4 page booklet and digital download, pressed in Europe. 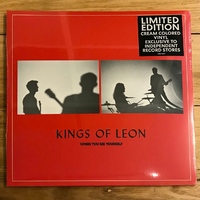