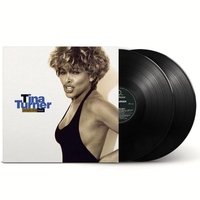 This is the first greatest hits set released since Tina’s mid 1980s career revival as a solo artist.

The album included a re-recorded version of her hit single “Nutbush City Limits” and three new songs “Love Thing”, “I Want You Near Me” and “Way Of The World”.

This album has become Tina’s biggest selling album in the UK staying on the album charts for more than 140 weeks and it has gone onto sell more than seven million copies worldwide since its release.

This double album 2LP record set is a 2019 reissue on black vinyl housed in a gatefold sleeve, pressed in Europe via Parlophone Records.