Midnights is a collection of music written in the middle of the night, a journey through terrors and sweet dreams. The floors we pace and the demons we face - the stories of 13 sleepless nights scattered throughout Taylor’s life.

The album was announced at the 2022 MTV Music Awards which made global headlines.

A few hours after teasing this, she announced ‘Midnights’ and described the album: “We lie awake in love and in fear, in turmoil and in tears. We stare at walls and drink until they speak back. We twist in our self-made cages and pray that we aren’t – right this minute – about to make some fateful life-altering mistake. This is a collection of music written in the middle of the night, a journey through terrors and sweet dreams. The floors we pace and the demons we face. For all of us who have tossed and turned and decided to keep the lanterns lit and go searching – hoping that just maybe, when the clock strikes twelve...we’ll meet ourselves. Midnights, the stories of 13 sleepless nights scattered throughout my life, will be out October 21. Meet me at midnight”.

Midnights is a concept album about nocturnal contemplation, written and produced by Swift with Jack Antonoff as the main collaborator.

Midnights has received widespread acclaim from music critics, most of whom have praised its subdued production and vocals.

The album has topped the album charts in the US, UK, Australia and many other countries around the world.

This album is on moonstone blue marbled coloured vinyl housed in a unique gatefold sleeve with printed inner sleeve and 8 page booklet, pressed in Europe via Republic Records. 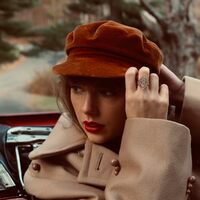