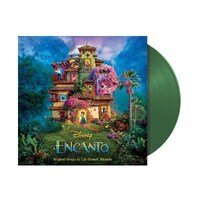 Encanto is the soundtrack album (with the original songs by Lin-Manuel Miranda) from the 2021 film Encanto directed by Jared Bush and Byron Howard, released in November 2021 via Walt Disney Records.

Encanto is the soundtrack album to Disney's 2021 film of the same name. Released by Walt Disney Records on 19 November 2021, the album contains eight original songs written by Lin-Manuel Miranda and produced by Mike Elizondo that were recorded by various singers.

To develop the soundtrack, Miranda and team visited Colombia (the setting of Encanto) to study the country's music. Consequentially, the album is rooted in genres such as vallenato, cumbia, bambuco and rock en español, making use of the traditional music instruments of Colombia, and incorporates salsa, tango, reggaeton and bachata styles alongside pop, hip hop, folk and musical theatre elements.

In the film, the songs are performed by the Madrigals, who are a multigenerational family with magical powers granted to them by a "miracle"; the lyrical themes revolve around individuality, self-worth, transgenerational trauma and familial love.

This album is a limited edition on translucent emerald green coloured vinyl with a printed inner sleeve, pressed in Europe via Walt Disney Records.