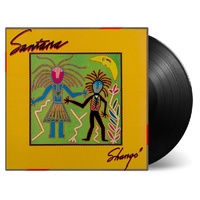 Santana's thirteenth studio album Shangó is named after one of the dominant religions in Latin America and the Caribbean.

The music on the album is closely related to contemporary pop music, but it also ranges from Latino and jazz influential pieces.

Santana gained public attention by appearing at the Woodstock festival in 1969. Latin influence has always been an important part of their music, although the band also created some blues rock and pop classics. Even after all these years front-man Carlos Santana is still actively performing.

This album is a 2020 reissue on 180 gram audiophile black vinyl with a printed insert, pressed in Europe via Music On Vinyl.