Stranger In The Alps is the debut studio album by American singer songwriter Phoebe Bridgers, released in September 2017 via Dead Oceans.

From the weeping strings and Twin Peaks twangs of opening track “Smoke Signals”, to the simple heartbreak of “Funeral” and melancholic crescendo of “Scott Street”, Stranger in the Alps is a swooningly beautiful record with a gothic heart.

This album is on black vinyl with a printed insert and download code, pressed in the US via Dead Oceans. 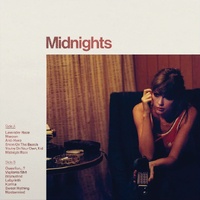