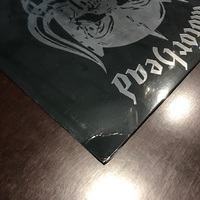 Share:
$42.90
In Stock
The album has a crease in the top right hand corner of the cover - see photo attached.

This would be the first album to feature what would become the "classic" Motörhead lineup of Lemmy Kilmister, "Fast" Eddie Clarke and Philthy Animal Taylor and their only release under Chiswick, as they were signed to the larger Bronze Records by early 1978.

To celebrate the 40th anniversary of its original release, the album is reissued as a special facsimile edition of the debut album. The silver logo and white vinyl release echoes Chiswick's original 1977 release, and includes a fully illustrated inner sleeve.

This album is a 40th Anniversary reissue on white coloured vinyl with a silver foil sleeve and printed inner sleeve, pressed in the UK via Chiswick Records.