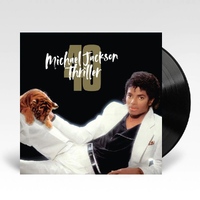 The follow-up to Michael Jackson's successful 1979 album Off the Wall, Thriller explores similar genres, including pop, post-disco, rock and funk. One of the most expensive albums ever produced at the time of its release, recording sessions for Thriller took place from April to November 1982 at Westlake Recording Studios in Los Angeles with a production budget of $750,000 (approximately US$1,850,000 in 2017 dollars), and was produced by Quincy Jones.

The album includes the ballads "The Lady in My Life", "Human Nature" and "The Girl Is Mine"; the funk pieces "Billie Jean" and "Wanna Be Startin' Somethin'"; and the disco set "Baby Be Mine" and "P.Y.T. (Pretty Young Thing)" and has a similar sound to the material on Off the Wall. "Wanna Be Startin' Somethin'" is accompanied by a bass and percussion background and the song's centerpiece, a climaxing African-inspired chant (often misidentified as Swahili, but actually syllables based on Duala), gave the song an international flavor. "The Girl Is Mine" tells of two friends' fight over a woman, arguing over who loves her more and concludes with a spoken rap, featuring Paul McCartney.

In "Billie Jean", Jackson sings about an obsessive fan who alleges he has fathered a child of hers, with the classic long bass-and-drums introduction. In the song "Thriller", sound effects such as creaking door, thunder, feet walking on wooden planks, winds and howling dogs can be heard. Horror film star Vincent Price provides the unique voice over on the track and Eddie Van Halen plays a ripper of a guitar solo in the song.

The anti-gang-violence "Beat It" became a homage to West Side Story and was Jackson's first successful rock cross-over piece. Jackson later said of "Beat It", "the point is no one has to be the tough guy, you can walk away from a fight and still be a man. You don't have to die to prove you're a man". "Human Nature", co-written by Steve Porcaro of the band Toto, is moody and introspective, as conveyed in lyrics such as, "Looking out, across the morning, the City's heart begins to beat, reaching out, I touch her shoulder, I'm dreaming of the street"

In just over a year of release, Thriller became the world's best-selling album, with estimated sales surpassing 65 million copies. It is also the best-selling album in the United States and the first album to be certified 32x multi-platinum by the RIAA.

The album won a record-breaking eight Grammy Awards in 1984, including Album of the Year.

Seven singles were released from the album: "The Girl Is Mine", "Billie Jean", "Beat It", "Wanna Be Startin' Somethin'", "Human Nature", "P.Y.T. (Pretty Young Thing)", and "Thriller", all of which reached the top 10 on the Billboard Hot 100 chart.

To celebrate the 40th anniversary of Michael Jackson’s Thriller, the biggest selling album of all time, it is being reissued on vinyl with alternative covert artwork.

Michael Jackson’s Thriller has now spent more than 500 weeks on the Billboard album chart and has sold over 100 million albums since its release on 30 November 1982.

This album is a 40th Anniversary reissue on black vinyl housed in a gatefold sleeve with alternate artwork and printed inner sleeve, pressed in Europe via Epic Records.