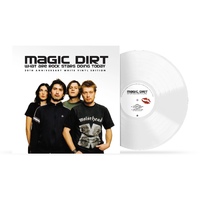 Their third album was the first released on their new record label and reached #35 on the Australian ARIA albums charts.

In an interview with Double J, lead singer Adalita Srsen talked about the album: "I just wanted to write happy stuff and poppier, upbeat stuff.". The band went into the studio and recorded What Are Rock Stars Doing Today, with an emphasis on the melodic pop side of their songwriting. Adalita reflected saying "It was totally our second phase as a band, our second rising. We were mid career, we still had a lot of steam, a lot of energy, a lot of writing to do...”

This album is a 20th Anniversary reissue on white coloured vinyl with a printed insert, pressed in Australia via Warner Music Australia.