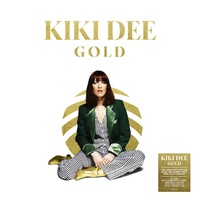 Gold is a compilation album by English singer Kiki Dee, released in May 2019 via Demon Records.

Kiki Dee is one of the great UK soul singers. She was the first female singer from the UK to sign with Motown Tamla Records, and has been a backing vocalist for Dusty Springfield.

Kiki Dee was signed to Elton John’s newly formed record label Rocket Records in 1973, and found immediate chart success with her single “Amoureuse” lifted from her Rocket debut album Loving And Free (released in November 1973). “Amoureuse” was written by French singer-songwriter Véronique Sanson, and originally released in 1972. Gary Osbourne wrote English lyrics to the song for the version recorded by Kiki Dee, and is given a co-writing credit for the song on this album.

Loving and Free was produced by Elton John & Clive Franks and the title track “Loving and Free” and “Lonnie and Josie” were released as singles from the album.

Her second Rocket album I’ve Got The Music In Me (1974) was credited to The Kiki Dee Band and produced by Gus Dudgeon, with the title track becoming a hit on both sides of the Atlantic, reaching #19 on the UK and #12 on the US singles charts.

Elton John & Clive Franks returned to produce her third Rocket album the self titled Kiki Dee, released in 1977 and produced a minor hit single “Chicago” (this song has a lovely string arrangement), which reached #28 on the UK singles chart.

Her last album with Rocket was Stay With Me, released in 1978 and produced by Bill Schnee, with a very lush and rich production sound reminiscent of the West Coast sound in flavour during the late 1970s.

Kiki Dee then signed with RCA records and Pip Williams produced her next studio album Perfect Timing which produced two singles that charted in the UK “Star” and “Perfect Timing”.

This vinyl album compiles a selection of songs from this era of Dee’s career, including her 1964 single “(You Don’t Know How) Glad I Am”, released on Fontana Records, which gives a lovely snapshot of her soulful vocals that helped get her signed to Motown Tamla Records.

Kiki Dee however, is probably best known for her hits “I’ve Got The Music In Me” and “Don’t Go Breaking My Heart” (with Elton John). The latter song saw Dee occupy the UK #1 single spot for six weeks in 1976 and #1 in the US with over 1 million copies sold.

This album is on 180 gram heavyweight gold coloured vinyl with a printed inner sleeve, pressed in Europe via Demon Records.