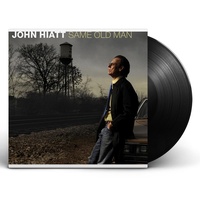 Appearing on the album are Kenneth Blevins on drums, Patrick O Hearn on bass and Luther Dickinson on guitar, mandolin and national resonator. John's daughter, Lilly Hiatt, sings harmony on the songs "Love You Again" and "What Love Can Do."

John Hiatt's career has spanned more than 30 years and his songs have been covered by everyone from Bonnie Raitt, Bob Dylan, Eric Clapton and BB King to Iggy Pop, Three Dog Night and The Neville Brothers.

This album is on 180 gram black vinyl with a printed insert, pressed in the US via New West Records.