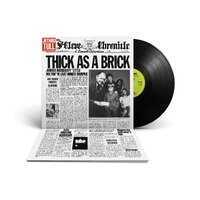 Jethro Tull - Thick As A Brick

Thick As A Brick is the fifth studio album by British progressive rock band Jethro Tull, originally released in March 1972 via Chrysalis Records.

Thick As A Brick is notable for only including one song, which spans the entire album. Thick As A Brick was deliberately crafted in the style of a concept album (and as a "bombastic" and "over the top" parody). The original packaging, designed like a newspaper, claims the album to be a musical adaptation of an epic poem by a (fictional) 8-year-old genius, though the lyrics were actually written by the band's frontman, Ian Anderson. This reissue of Thick As A Brick features the Steven Wilson mixes.

This album is a limited edition 50th Anniversary reissue of 2000 copies on black vinyl with reproduced newspaper artwork and half speed remastered audio featuring the Steven Wilson remix, pressed in Germany via Chrysalis Records.