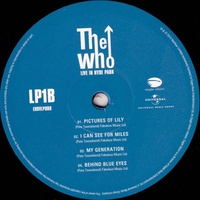 The Who Live In Hyde Park is a live album and video concert recording of their 26 June 2015 50th Anniversary Concert in London's Hyde Park by the British rock band The Who, released in November 2015 via Eagle Vision.

Filmed on 26 June 2015 as The Who celebrated their fiftieth anniversary, this stunning show from London’s famous Hyde Park is a triumphant return to their home city.

On a glorious summer evening the band delivered a brilliant performance of all their greatest hits in front of a 50,000 strong crowd.

With a series of stunning backdrops making full use of the huge screens surrounding the stage and an exceptional light show this is a Who concert on a grand scale but as Pete Townshend says at the start of the show “You’re a long way away…but we will reach you!”. He’s absolutely true to his word.

The set list includes Who classics such as My Generation, Pinball Wizard, Baba O'Riley, I Can't Explain, You Better You Bet, Who Are You, Won't Get Fooled Again and I Can See For Miles.

Roger Daltry and Pete Townshend are the two remaining original members of The Who celebrating this 50th Anniversary Tour.  The band members in the live concert include:

This is a cracking concert and not to be missed for any Who fan.

This is a Limited Edition Triple Album 3LP + DVD package on 180 Gram Vinyl housed in a Tri-Fold Sleeve, pressed in Europe.