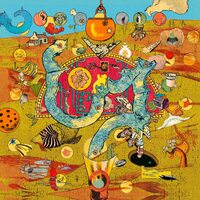 Django Django who met at art school in Edinburgh, first came to people’s attention after a gradual migration to London a couple of years before the release of their debut album. The double A-side single "Storm" / "Love's Dart" released in 2009 laid the blueprint for a confident, adventurous and psychedelically-bruised strain of art-rock that melds intangible electronic flourishes to the visceral rub of live instrumentation.

The time since the release of their debut single was spent holed away, expanding upon that blueprint, seeing where they could push it. The resulting album reached #33 on the UK albums chart and was nominated for the 2012 Mercury Music Prize.

The album is celebrating the 10th Anniversary of its release in 2022 and the original album has been reissued alongside a second disc of the entire album mixed by dub pioneer Mad Professor.

This triple album 3LP record set is a 10th Anniversary expanded edition on 180 gram black vinyl with the original album 2LP set housed in a gatefold sleeve with printed inner sleeves, poster, and the Mad Professor dub mix LP3 housed in a separate single pocket sleeve with both sets housed in a stickered PVC sleeve, pressed in France via Because Music.