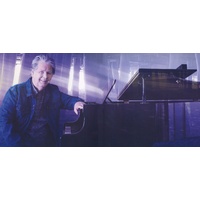 No Pier Pressure is the eleventh studio album by American musician and singer-songwriter Brian Wilson, released in April 2015 via Capitol Records.

Wilson intended to record with the The Beach Boys after their 50th anniversary celebration, but decided to make a solo album instead.

Sessions were conducted at all three studio spaces at Ocean Way Recording, Hollywood over a period of about a year-and-a-half. Senior staff engineer Wesley Seidman worked with Wilson in the studio, who preferred tracking band performances on ProTools while using vintage equipment.

That's Why God Made the Radio and Imagination collaborator Joe Thomas was involved with songwriting a majority of the tracks on the album with Wilson and co-production together with Brian.

The album features guest performances by contemporary artists Sebu Simonian of Capital Cities, Kacey Musgraves, She & Him, and Nate Ruess of Fun. Original Beach Boys members Al Jardine and David Marks also feature alongside former band member Blondie Chaplin. Originally planned as a follow-up to The Beach Boys' 2012 reunion album That's Why God Made the Radio, No Pier Pressure is the first solo Wilson LP devoted primarily to new and original material since That Lucky Old Sun in 2008.

A standout track on the album is The Last Song.  Don Was commented, "Brian's really on it. I was knocked out by a couple of songs on that last Beach Boys record – 'Summer's Gone' ranks with his greatest work. I didn't expect that he's got a whole other album of stuff on that level ... I got really choked up playing bass on that track. There's something about Brian signing off with it, saying, 'This is it, this is my last song.' It's really intense. If 'The Last Song' turned out to be his last song, can you imagine? Wow. That'd be some coda."

Peaking at number 28 on the US Billboard 200, the album received mixed reviews which largely criticized its adult contemporary arrangements and production sound which were allegedly at the behest of co-producer Joe Thomas, who previously co-produced the Beach Boys' Stars and Stripes Vol. 1 (1996) and Wilson's Imagination (1998).

Brian has toured extensively since ther release of this album with a hot young backing band together with former Beach Boy members Al Jardine and Blondie Chaplin.  The concert in April 2016 at Melbourne's Palais Theatre was fantatstic, showcasing the legacy of The Beach Boys music, but also his solo work.

Check out a couple of tracks from the album here:  This Beautiful Day, Runaway Dancer, On The Island, The Right Time, One Kind of Love and The  Last Song.

This is a Double Album 2LP Record set pressed on 180 Gram Vinyl housed in a Gatefold Sleeve with Printed Inner Sleeves with Lyrics and Credits and a Digital Download Code, pressed in Europe.