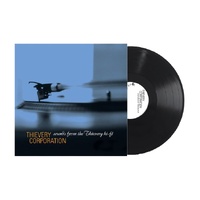 The debut album from Thievery Corporation was released in 1997 as a first-of-its-kind electronica record. The phrase "trip-hop" was coined in 1994 during the influx of alt-rock techno music and perfectly describes the acid-jazz tracks that make up the album.

With a blend of lounge, electronic, and folk influences, this is a listening experience that caters to everyone. The remastered album features the signature track "Shaolin Satellite" and bonus tracks "Sun, Moon, and Stars" and "Sleeper Car."

This double album 2LP record set is a 2022 reissue on black vinyl housed in a gatefold sleeve, pressed in Europe via Primary Wave.