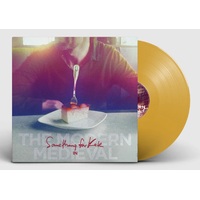 The Modern Medieval is the seventh studio album by Australian alternative rock band Something For Kate, released in November 2020 via EMI Records Australia.

There is no denying The Modern Medieval, the new album from Something for Kate. A song cycle that’s incisive, compelling, and transformative, for both the listener and the Melbourne trio.

The band’s first studio set in eight years is an electrifying salve for these strange days and a new benchmark in a storied career. Offering an unprecedented depth of songwriting, it’s the 2020 vision you’ll need to hear and hear again.

An evocative reminder that greatness isn’t a burden, it’s a starting point for creating something that matters, the record is defined by urgent instrumentation, bittersweet melodies, and lyrics that are daring in their detail; you can hum along even as these songs hit you hard.

The album has reached #4 on the Australian ARIA albums charts.

This album is an indies store limited edition on gold coloured vinyl with a printed insert, pressed in Australia via EMI.