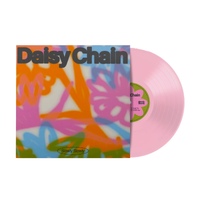 Daisy Chain was mixed by industry heavyweight Jonathan Gilmore (The 1975, Charlie XCX), and sonically this is the band’s most ambitious record to date.

Previous singles ‘Blueprint’, ‘Nothing On’ ‘Forget You’ and ‘Longshot’ have all been added to triple j.

In 2022 the band played their biggest headline shows to date including a sold out hometown show at The Forum in Melbourne.

This album is a limited edition of 600 copies on opaque pink coloured vinyl with a printed insert, pressed in Australia via UNFD.