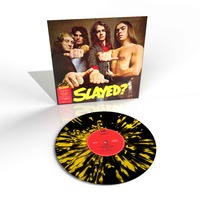 Slade are without doubt one of the most exciting bands to come out of Great Britain. With their unique blend of perfect pop and rock 'n' roll, outrageous flamboyance and pure fun, Slade have become a firm favourite in the hearts of pop fans all over the world for nearly fifty years.

Slayed? was released after the success of several non-album singles that reached the Top 10 on the UK singles charts. Their 1972 album Slayed? Promptly rose up the charts around the world, reaching #1 in the UK and Australia and produced two Top 10 singles “Mama Weer All Crazee Now” and “Gudby T’Jane”, with “Let The Good Times Roll” released as a US only single.

In 2010, Classic Rock magazine considered the album an "essential classic", adding that it featured "party-hard tracks, and even something approaching a ballad with "Look at Last Nite", ensuring that Slayed? inarguably ticks all the right boxes." The Guardian noted the album's singles and other tracks as being "deservedly party riff monsters", but added: "Slayed?'s majesty lies in the melancholy ballads. "Look at Last Nite's" haunting refrain fingers both empty celebrity and fame's creeping downside."

The album was included in the book 1001 Albums You Must Hear Before You Die.

This album is a 2021 limited edition reissue on yellow with black splatter coloured vinyl, pressed in Europe via BMG.