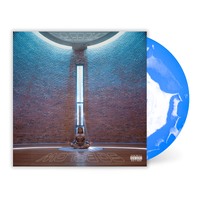 Sampa The Great - As Above, So Below

As Above, So Below is the second studio album by Zambian-Australian hip hop artist Sampa The Great, released in September 2022 via Lorna Vista.

ARIA-Award winning, Zambian-born Botswana-raised poet and rapper, Sampa The Great recently announced the arrival of her sophomore full-length album, As Above, So Below.

After relocating home to Zambia during the pandemic, Sampa reconnected with a different side of herself, one closer to the younger artistry that was nourished growing up in Africa. From collaborations with South Africa-based creatives Rochelle Nembhard and Imraan Christian, to time spent recording with a long-established network of close friends and family, Sampa unlocks an age of authenticity, and debuts a 360 Sampa to the world.

As Above, So Below unveils the many sides of Sampa, throughout a sophomore record that fuses the serious to the sensual. As Above translates as Sampa's outside self, while So Below is the Sampa within, together uniting to reveal the highest version of herself, without a mask, or role to play.

Anchoring the record, is Eve: Sampa’s blueprint of her ideal self who manifests within As Above, So Below’s lyrics, and visually appears throughout the album’s forthcoming videos.

Sampa returned earlier this year, with As Above, So Below’s first single, “Lane” featuring US rapper Denzel Curry. Ushering in a new era, “Lane” was the first taste of Sampa’s own new music since 2019’s ARIA Award and Australian Music Prize winning debut album, The Return.

A defiant call out to being shoved in a box, “Lane” was accompanied by a long-form video that book-ended and balanced a spoken word piece, “Origin'', wherein fans were introduced to Sampa’s ideal persona, Eve.

After the postponement of last year’s inaugural and highly anticipated An Afro Future tour, Sampa delivered a spectacular run of rescheduled live performances across Sydney and Melbourne in May and June. The tour marked the first opportunity for fans to see Sampa in live format with her full band from Zambia, performing from her debut award-winning album, The Return, alongside previewing new music to the energetic crowds.

2019 saw tremendous achievements for Sampa The Great, taking home Best Hip Hop Release for “Final Form” at the ARIA Awards, alongside multiple other wins at the J Awards, the Music Victoria Music Awards, while breaking industry records by winning the prestigious Australian Music Prize twice in her career. The Return received praise from the likes of The Guardian, NPR, Pitchfork, The FADER, Billboard, OkayAfrica and countless others.

As a highly applauded live performer, Sampa The Great performed for the first time at Coachella 2022, followed by an appearance at Primavera Sound, and a return to Glastonbury Festival.

This album is an indies record store limited edition on white and blue smash coloured vinyl with a printed inner sleeve and insert, pressed in Australia via Lorna Vista.