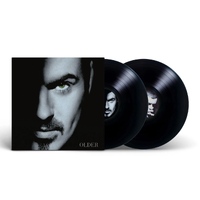 Older is the third solo studio album by British singer-songwriter George Michael, originally released in May 1996 via Aegean and Virgin Records in the UK and DreamWorks in the US.

The album produced six singles, two of which - ‘Fastlove’ and the haunting ‘Jesus To A Child’ - reached #1 in the UK, with the other four peaking in the top three of the singles charts.

The album was a huge global commercial success, going 6x platinum in the UK, as well as verified platinum in another 22 countries (including #1 debut in Australia, double platinum accredited).

Written, arranged and produced by George, it sees him exploring new genres as he reflected on life, loss, love and healing.

This iconic album is now available on vinyl, beautifully remastered from the original tapes.

This double album 2LP record set is a 2022 reissue on 180 gram heavyweight black vinyl housed in a gatefold sleeve with printed inner sleeves and remastered audio, pressed in Europe via Aegean Records.