Gang Of Youths - Angel In Realtime.

Angel In Realtime is the third studio album by Australian rock band Gang Of Youths, released in February 2022 via Mosy Recordings.

angel in realtime. is the highly anticipated follow up to the multiple Aria Award winning, ‘Go Farther In Lightness’, which took out Album Of The Year at the 2017 Aria Awards.

“The album is about the life and legacy of Dave's father, indigenous identity, death, grief and God. And also the Angel, Islington.” Gang Of Youths

Despite and indeed because of frontman Dave Le’aupepe’s father’s absence, his influence permeates every talking point that album, ‘angel in realtime.’, offers.

At times it’s solely focused upon the precise, personal experiences of loss: the dichotomy of intensity and peace that comes as someone passes through their final days; the overwhelming feeling in the wake of their death that life will never be the same, even if the rest of the world at large remains utterly unchanged.

This double album 2LP record set is a limited edition on white coloured vinyl housed in a single pocket sleeve with printed insert, pressed in Australia via Mosy Recordings. 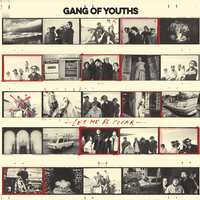