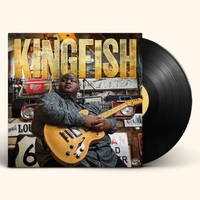 "One of the most exciting young guitarists in years, with a sound that encompasses B.B. King, Jimi Hendrix and Prince." —Rolling Stone

For the 2020 Grammys, Kingfish was nominated for a Grammy Award for Best Traditional Blues Album

This album is on black vinyl housed in a single pocket sleeve, pressed in the US via Alligator Records.