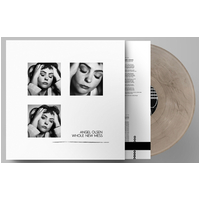 Whole New Mess combines the dazzling ambition of All Mirrors with the force and power of Angel Olsen as a solo performer.

Whole New Mess was recorded over ten days in October 2018 with engineer Michael Harris. The pair worked in isolation in the town of Anacortes, Washington, recording in a converted Catholic church. Olsen would use the church's corridors to create a natural echo effect on her vocals.

Many of these songs are already established as among the best she has ever written, and they are presented here at their most fundamental. Recorded not as demos but as a necessary and intentional precursor to All Mirrors, Whole New Mess reinforced Olsen as an incomparable songwriter and performer.

Considered alongside ‘All Mirrors’, ‘Whole New Mess’ is a poignant and pointed reminder that songs are more than mere collections of words, chords and even melodies.

The album was written following the collapse of a romantic relationship, with Olsen noting in an interview with David Smyth of the Evening Standard: "…I was really depressed. I had no idea whether the songs were good. They were just about my life. I could have recorded them at home and kept them as demos, but I knew Michael [Harris] was someone I could be depressed in front of, who would help me to explore it in different ways. It was such an emotional process...".

This album is a limited edition on clear smoke translucent coloured vinyl housed in a gatefold sleeve with printed inner sleeve, fold out poster, and download code, pressed in the US via Jagjaguwar.