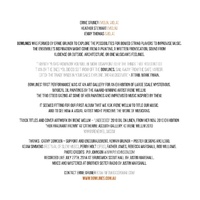 Circling Strangers is a live recording by Australian string trio Bowlines, released in October 2016 via Bowlines.

Bowlines was formed by Australian musician Ernie Gruner to explore the possibilities for bowed string players to improvise music. The ensemble’s inspiration might come from a painting, a written provocation, sound from audience or outside, architecture, or one musician’s feelings.

Bowlines’ first performance was at an art gallery for an exhibition of large-scale mysterious, magical oil paintings by the award-winning artist Irene Wellm. The trio stood gazing at some of her paintings and improvised music inspired by them.

It seemed fitting for their first album that the trio asked Irene Wellm to title thier music, and see how a visual artist might perceive the work of musicians.

Joining Ernie on this recording are Heather Stewart on violin and Jenny Thomas on viola.

The stunning cover art is by Irene Wellm - "Undecided" 2010 Oil on linen, from her Nov. 2010 exhibition "Her Fragrant Frown" at Catherine Asquith Gallery. Copyright Irene Wellm 2010.

Check out a couple of tracks from the album here:  Tender Speak, Circling Strangers and The Captain's Tale.

This album is released on compact disc CD housed in a gatefold cardboard sleeve, pressed in Australia.