Spiralling was self-produced by Wil Wagner, recorded and mixed by The Smith Street Band’s drummer Matt Bodiam and mastered by Joe Carra at Crystal Mastering.

Wil has reached the ARIA album charts three times already in 2020, twice with The Smith Street Band (#1 & #4), and on his own with a digital reissue of an old demo tape at #49.

This album is on yellow coloured vinyl at 45 RPM with a printed insert, pressed in Australia via Pool House Records. 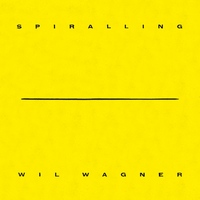