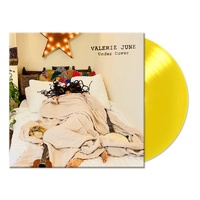 Under Cover is an extended play by American singer songwriter Valerie June, released in August 2022 via Fantasy Records.

Acclaimed Grammy-nominated singer-songwriter and multi-instrumentalist Valerie June presents Under Cover; a specially curated 8-track covers collection that contains singular interpretations of some of her favourite songs. These include previously unreleased versions of Mazzy Star’s “Fade Into You”, Frank Ocean’s “Godspeed”, Joe South’s “Don’t It Make You Want To Go Home”, Gillian Welch’s “Look At Miss Ohio”, and Nick Cave & The Bad Seeds’ “Into My Arms”.

Bob Dylan’s sublime “Tonight I’ll Be Staying Here with You”, which was only available as an Amazon Original exclusive, rounds out the set.

This 12” EP is a limited edition on yellow coloured vinyl with a printed inner sleeve, pressed in the UK via Fantasy Records.