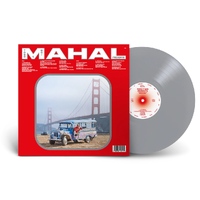 Mahal is the seventh studio album by American musician and producer Toro y Moi, released in April 2022 via Dead Oceans.

Toro y Moi’s seventh studio album, ‘MAHAL’, is the boldest and most fascinating journey yet from musical mastermind Chaz Bear.

The record spans genre and sound - encompassing the shaggy psychedelic rock of the 1960s and ‘70s, and the airy sounds of 1990s mod-post- rock - taking listeners on an auditory expedition, as if they’re riding in the back of Bear’s Filipino Jeepney that adorns the album’s cover.

But ‘MAHAL’ is also an unmistakably Toro y Moi experience, calling back to previous works while charting a new path forward in a way that only Bear can do.

‘MAHAL’ is the latest in an accomplished career for Bear, who’s undoubtedly one of the decade’s most influential musicians. Since the release of the electronic pop landmark ‘Causers of This’ in 2009, subsequent records as Toro y Moi have repeatedly shifted the idea of what his sound can be. But there’s little in Bear’s catalogue that will prepare you for the deep-groove excursions on ‘MAHAL’, his most eclectic record to date.

This album is a limited edition on silver coloured vinyl housed in a gatefold sleeve with silver foil, printed inner sleeve and download code, pressed in the US via Dead Oceans.