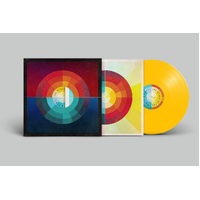 Love & Fire is The Black Seeds’ seventh studio album, and the  ten track album features the exciting new single ‘It’s So Real’, plus previously released singles ‘Bring The Sun’, ‘Let The Sunshine Through’ and ‘Raised With Love’.

Long established as one of New Zealand’s finest bands and with a solid foothold in Europe and North America, The Black Seeds have carved out their reputation on the back of multi-platinum selling albums, and a masterful live show that has been filling dance floors across the globe for years.

While firmly based in the island grooves that inspired the birth of the band over a decade ago, The Black Seeds’ sound casts a wide net, layering funk, soul, Afrobeat, and other eclectic elements over their dub/reggae foundations.

This album is a limited edition on 180 gram heavyweight opaque yellow coloured vinyl with a printed inner sleeve and download code, pressed in New Zealand via Proville Records.