Sultana is a Maltese-Australian who has been playing guitar since she was three years old. During her teenage years, she played in a band known as MindPilot from 2008 to 2012 as a guitarist/lead vocalist. Her career in music began through busking, and she has been active as a musician on Bandcamp since 2013. Described as a "one-woman band who brings new meaning to the concept of multi-tasking", she is best known for her 2016 single "Jungle". Her debut studio album Flow State was released in 2018 to favourable reviews and considerable chart success both in Australia and overseas.

Terra Firma is the sound of a more contented and grounded Tash. Spiritually, the album finds the artist reconnecting to their roots, reminding themselves who they are and what it means to be human. Musically however, its fourteen tracks take root into far-reaching sonic territory.

Almost every note on Terra Firma was once again composed, arranged, performed, engineered and produced by Tash. But to kick-start a new era, the solo star (for the first time) opened themselves up to collaborators, starting with a 10-day writing session with fellow ARIA-winning Australian musician Matt Corby and producer Dann Hume (Courtney Barnett, Amy Shark, Angus & Julia Stone).

Sultana said about the album "I didn't realise that I needed to create a space and home for myself to feel like a person again. I just went inward and found a really peaceful place and wrote an album, and I feel really happy with it”.

Sultana has created a very full sound for the album and it flows and ebbs nicely with influences of soul, R&B, fusion jazz and hip hop beats. Keyboards and other layered instruments and vocals augment the guitars to give a very full sound and it is hard to believe it is a solo effort; it sounds very much like a band effort to create the album.

Thoroughly enjoyable and the album finishes with two really strong tracks “Let The Light In” and “I Am Free”.

A very strong second album from this talented Australian musician.

This double album 2LP record set is on black vinyl housed in a gatefold sleeve with a fold out poster, pressed in Australia via Lonely Lands and Sony Music. 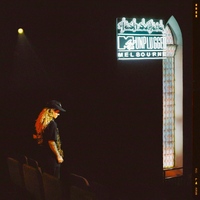