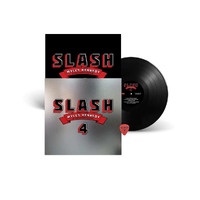 4 is the fourth studio album by American guitarist Slash, featuring Myles Kennedy and The Conspirators, released in February 2022 via Gibson and BMG.

Saul Hudson known professionally as Slash, is a British-American musician and songwriter, best known as the lead guitarist of the American hard rock band Guns N' Roses, with whom he achieved worldwide success in the late 1980s and early 1990s. During his later years with Guns N' Roses, Slash formed the side project Slash's Snakepit.

After leaving Guns N' Roses in 1996, he co-founded Velvet Revolver, which re-established him as a mainstream performer in the mid to late 2000s. Slash has since released three solo albums including two with his band, Myles Kennedy and the Conspirators. He returned to Guns N' Roses in 2016, nearly 20 years after he had left.

Slash has received critical acclaim as a guitarist. Time named him runner-up on their list of "The 10 Best Electric Guitar Players" in 2009, while Rolling Stone placed him at No. 65 on their list of "The 100 Greatest Guitarists of All Time" in 2011. Gibson Guitar Corporation ranked Slash as No. 34 on their "Top 50 Guitarists of All Time. He was inducted into the Rock and Roll Hall of Fame as a member of Guns N' Roses' classic line-up.

It’s been a decade since Slash featuring Myles Kennedy and The Conspirators released their debut album together, and since then have been on one of the more impressive and unrelenting tears in rock ‘n’ roll, issuing two more hard-hitting, highly-acclaimed records, and rocking stages all over the world.

Enter ‘4’, the brand-new and highly anticipated studio effort from SMKC. True to the band’s expanding legacy, it’s everything you’ve come to expect from Slash, Myles Kennedy, Todd Kerns (bass), Brent Fitz (drums) and Frank Sidoris (rhythm guitar), but also unlike anything you’ve heard from them yet.

This time out, Slash says, they captured a certain “magic” – the sound of five musicians and band mates listening to and playing off one another in the spirit of live, in-the-moment collaboration.”

This album is on black vinyl housed in a mirrored o-card outer sleeve with one of four random coloured album sleeves, a printed inner sleeve and guitar pick, pressed in Europe via BMG.