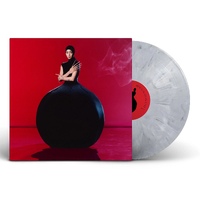 Hold The Girl is the second studio album by Japanese-British singer songwriter Rina Sawayama, released in September 2022 via Dirty Hit.

Written and recorded over the last year and a half, Rina once again teamed up with long-term collaborators Clarence Clarity and Lauren Aquilina as well as enlisting help from the likes of the legendary Paul Epworth (Adele, Florence & the Machine), Stuart Price (Dua Lipa, The Killers, Madonna) and Marcus Andersson (Demi Lovato, Ashnikko) for their magic touch.

The product of Rina and these collective minds coming together is an album which melds influences from across the pop spectrum and is a bold and honest statement of Rina's personal evolution; coming to terms with her own past and the jubilation of turning to the future.

This album is an Australian limited edition on silver and grey marbled coloured vinyl housed in a gatefold sleeve with printed insert, pressed in Australia via Dirty Hit.