Recorded at Toast Studios in San Francisco around the turn of the millennium, Toast features Young’s legendary musical collaborators Crazy Horse at a ragged and thundering apex. For the past two decades, Toast has been whispered about in collectors’ circles in hushed tones, as Young has dropped pieces of information about it here and there, especially as it contains three never-before-released songs.

Last year, in his virtual daily newspaper, The Times Contrarian, Young wrote about the album in-depth. “The music of Toast is about a relationship,” he said. “There is a time in many relationships that go bad, a time long before the breakup, where it dawns on one of the people, maybe both, that it's over. This was that time.”

Aptly, Toast is heavy and distressed, brimming with electrifying tension. Even its sweet- sounding opening track, “Quit,” features the refrain, “Don’t say you love me.”

“Standing In The Light of Love” and “Goin’ Home” let the Horse off the tether in fields of overdriven guitar; an out-of-work logger grapples with his faith on the breakneck “Timberline;” and on “Gateway of Love,” Young dreams of a less painful future over a hypnotizing 10 minutes, leading into the somber, brokedown “How Ya Doin’?”

The songwriter sums up the album best during its shadowy finale “Boom Boom Boom”: “All I got is a broken heart, and I don’t try to hide it when I play my guitar.”

This double album 2LP record set is on black vinyl with an Etched Side D housed in a gatefold sleeve with printed insert, pressed in Europe via Reprise Records. 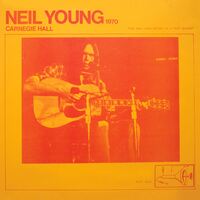