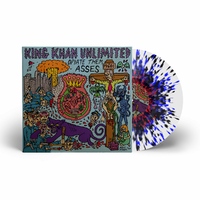 Featuring his majesty’s dream line up of Bordeaux’s finest rock‘n’roll lifers, The Magnetix and Fredovitch (from King Khan & The Shrines), King Khan Unlimited’s new slab of punk rock is chock full of stinging social critique delivered with wit and a wry smile.

This limited edition LP is on white vinyl with blue, red and black splatter, pressed in Australia via Bargain Bin Records and Cooking Vinyl.