Positive Rising Part 2 is the fifth studio album by Australian dance punk band DZ Deathrays, released in July 2021 via I Oh You.

Positive Rising Part 2 is the highly anticipated follow up to 2019’s Positive Rising Part 1 which saw widespread praise from local press, triple j and community radio, earned an ARIA nomination for Best Hard Rock/Heavy Metal Album and took out the prize for Best Independent Punk Album at the 2019 AIR Awards.

With a moodier tone than its predecessor, Positive Rising Part 2 draws the outline of an apocalyptic scene, one that sees the band – Shane Parsons, Simon Ridley and Lachlan Ewbank – stepping outside of themselves, seeking out new perspectives and surveying the world from above. From up there, they don't always like what they see, but Positive Rising Part 2 offers a somewhat-hopeful ending to the sprawling rock saga.

This new album features key tracks ‘Fired Up’, ‘All Or Nothing’, ‘Fear The Anchor (feat. Ecca Vandal)’ and ‘Make Yourself Mad’ which have been met with acclaim from fans and industry alike, with adds to local and international rock playlisting on Spotify and Apple Music plus coverage from the likes of DIY Mag (UK), Upset Mag (UK), The Line Of Best Fit, Far Out Mag, Deadpress, Stereoboard, Blunt Mag, Rolling Stone AU, NME and triple j. ‘Fear The Anchor (feat. Ecca Vandal)’ was added to Amazing Radio (UK) and recently hit #16 on New Zealand’s national Rock Radio chart. ‘Fired Up’ and ‘All Or Nothing’ were added to rotation at triple j, both making it to the top 10 most played song on the station.

This album is a limited edition on translucent purple coloured vinyl housed in a gatefold sleeve, pressed in Australia via I Oh You. 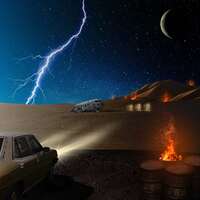