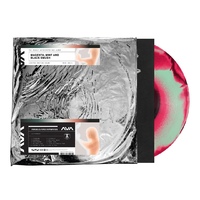 Lifeforms was a conscious effort by the band's frontman, Tom DeLonge, to return to the band's earlier sound, while also incorporating elements of punk rock and post hardcore. To do this, the band put a higher emphasis on the guitar parts to give the album a more "rebellious and emotional connection" to listeners. It was recorded over the span of three years, beginning in April 2018.

Thee have been five singles released from the album; "Rebel Girl, "Euphoria", "Restless Souls", "Losing My Mind", and "Spellbound".

The album has been well received by music critics and has reached #36 on the US Billboard 200 and #17 on the UK albums charts.

This album is a limited edition of 13000 copies on magenta, mint and black smush coloured vinyl housed in a single pocket sleeve with lyric booklet and reflective “mylar space bag”, pressed in the US via Rise Records.