No Plan is an EP by British singer-songwriter David Bowie released posthumously in January 2017 via ISO Records and Columbia Records. 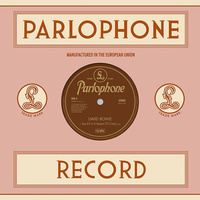