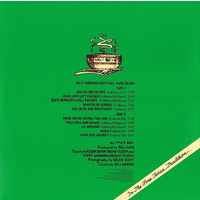 Formed in 1969 in Houston, Texas, ZZ Top began with blues-inspired rock, later incorporating new wave, punk rock and dance-rock by using synthesizers. The band is composed of bassist and lead vocalist Dusty Hill, guitarist and lead vocalist Billy Gibbons (the band's leader, main lyricist and musical arranger), and drummer Frank Beard. One of the few major label recording groups to keep the same lineup for more than 45 years, the band are known for their technical mastery, and strong guitar driven sounds, as well as their humorous lyrics laced with double entendres and innuendo. As one of the biggest selling bands in the US, they have released eleven gold, seven platinum, and three multi-platinum records, and were inducted into the Rock and Roll Hall of Fame in 2004.

Recorded at Brian Studios and Ardent Studios in Memphis, Tennessee, and produced by the band's manager Bill Ham, Tres Hombres became ZZ Top's commercial breakthrough. An album deeply rooted in the blues, opening with "Waitin’ for the Bus" followed by "Jesus Just Left Chicago", the irresistible stripped-down songs, cheeky sense of humor, and an unapologetically Texan image, set ZZ Top apart from the likes of Lynyrd Skynyrd and The Allman Brothers Band, that were defining southern rock at the time.

This version of Tres Hombres has been remastered from the orginal analog master tapes for audiophile quality, and is closer to the original 1973 mastering of the album than the 1980's digital remix.

This LP record is reissued (May 2014 via Warner Bros. Records) on 180 gram high performance vinyl housed in a gatefold sleeve, featuring remastered audio, pressed in Europe.