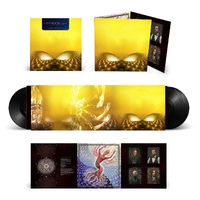 Fear Inoculum was the band’s first studio album in thirteen years and was released to critical acclaim with many critics feeling that the band had refined their sound. The album went to #1 on the US Billboard 200 and Australian ARIA albums charts with an initial release on CD and download.

The first official vinyl release was a limited edition deluxe 5LP vinyl box set, released in April 2022. The album is now being released on a 3LP vinyl set with new album artwork.

This triple album 3LP record set is on 180 gram black vinyl with an etching on Side F, housed in a triple gatefold sleeve with a poster, pressed in Europe via Tool Dissectional and RCA Records.