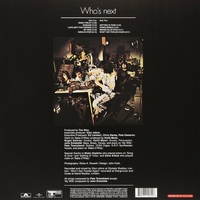 Who’s Next is the fifth studio album by British rock band The Who, originally released in August 1971 by Decca Records.

Who’s Next is one of those carved-in-stone landmarks that the rock canon doesn’t allow you to bad-mouth. It was pretty radical for its day and it still sounds ablaze. There’s not much that isn’t thrilling about “Won’t Get Fooled Again” and “Baba O’Riley”, which howl and kick like they were born yesterday.

Like many near-masterpieces, it wasn’t meant to turn out like it did. Pete Townshend had one of his ‘futuristic rock opera’ ideas, and recordings began on a work called Lifehouse. It wouldn’t gel, so The Who made the most of the random songs that did. On release in 1971 it blew away critics and fans alike. The album sleeve also wasn’t exactly bland, picturing the foursome pissing on a slagheap.

“Baba O’Riley” makes a spectacular opener, its hypnotic drone disrupted by power chords that are parachuted in off the backs of meteorites. The subtle then frantic viola solo raises it another gear. There has rarely been a more durably evocative refrain than “teenage wasteland”. As ever, Daltrey’s ragged voice brings humanity to Townshend’s over-thinking. Moon is typically hyperactive: any drummer playing like this today would be ordered to rein it in. “Bargain” floats on the tension between acoustic guitar and the brave new synth. Like most of the album, it’s melodramatic without fattening into pomposity. “The Song Is Over” oozes poignancy and “Getting In Tune” and “Going Mobile” are simply great songs. “Behind Blue Eyes” is a soul-searching ballad which bursts into belligerence, reflective then urgent.

The climactic (and how) “Won’t Get Fooled Again” stretches itself and chews its restraints until it becomes much more than a riff and a scream. It’s on fire. In “meet the new boss, same as the old boss” it nailed the bleeding heart of protest-pop.

Who’s Next is The Who’s best.

Check out the tracks: “Won’t Get Fooled Again”; “Baba O’Riley” and “Behind Blue Eyes”.

This "Back to Black" series LP with remastered audio and digital download code is pressed in Europe on 180 gram heavyweight vinyl.