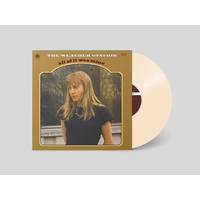 The Weather Station - All Of It Was Mine

All Of It Was Mine is the second studio album by Canadian folk band The Weather Station, originally released in August 2011 via You've Changed Records.

Incisive and insightful folk music by Tamara Lindeman, who is the front person of Canadian folk outfit The Weather Station. A beautifully sung depiction of the growing things, and the crawling things, and the loving and hurting things that move around, bewildered and dazzled. All Of It Was Mine is fast approaching legendary status. The album was produced by Daniel Romano.

"Somehow, it’s been ten years since I made All Of It Was Mine. It’s strange that it’s been ten years, and yet, when I listen to it, it feels like more. My voice is unfamiliar to me; so high and innocent sounding. I sound so young, barely removed from the soprano voiced choir kid I once was. But yet, this record, small and slight as it is, feels like the foundation of so many things that I learned, ten years ago. Things that protected me, kept me on course. Lessons so pivotal that I can’t imagine my life had I not learned them.

In the context of this world and my one recording experience, I didn’t know what to make of the collection of small, wordy songs I had written on banjo and classical guitar.

The story of All Of It Was Mine is not all lightness for me. It was a breakup record, though I didn’t know that at the time I wrote the songs. But the day we finished it, Dan (Romano) turned to me, and casually asked me; “so, are these songs - true?” – TL

Originally released on 16 August 2011, via You've Changed Records, Fat Possum Records is releasing a 10th anniversary edition on both standard black, and limited edition, bone coloured vinyl. The 10th anniversary edition comes with updated artwork and new liner notes from Tamara Lindeman, reflecting on the ten years since "All Of It Was Mine" was released.

This album is a 10th Anniversary limited edition of 1500 copies on bone coloured vinyl at 45 RPM with a printed insert, pressed in the US via Fat Possum Records.