Wagonwheel Blues is the debut studio album by American indie rock band The War On Drugs, released in June 2008 via Secretly Canadian Records.

The wagon-wheel effect is a stroboscopic illusion which tampers with one’s grasp of the persistence of vision.  It suggests that, gazing through a wagon or stagecoach wheel, one is watching a film when they are actually watching the world turn from a satellite.  It distorts your perceptions, makes you think progressing forward is actually going backwards, staying still, or slowing down and vice versa for the reverse motion.

On debut Wagonwheel Blues, The War On Drugs belt out a rugged and earnest rock `n’ roll sound that recalls the likes of Bruce Springsteen or Highway 61 Revisited-era Bob Dylan, and do so with a seemingly limitless well of power and intensity. Yet there’s a monstrous density to their sound as well, drawing influence from Sonic Youth and My Bloody Valentine in their noisy walls of distortion and effects. As much as this dense clamor sets their sound apart from many of today’s other E Street Band fetishists, it’s their amped-up bar band approach that wins out the majority of the time, making this both an extremely fun and considerably loud opening statement.

The harmonica-blazing opening track, “Arms Like Boulders,” may remind some of fellow Philadelphians Marah in its boisterous and meticulously crafted roots rock. Kurt Vile and Adam Granduciel’s guitars sound clean and chime with a glistening clarity, yet the latter’s scratchy-throated vocals are what push the song further toward a Tom Petty-like Americana jangle. The rollicking “Taking The Farm,” meanwhile, is like an upbeat, shoegazer take on “I’m On Fire,” which is just as cool as it sounds on paper.

It’s around track five, “There Is No Urgency,” at which the blue collar anthems subside and the swirling clouds of effects take over. “There Is No Urgency” isn’t driven by riffs or hooks as it is by mood, engulfed in heady waves of distortion and Hammond organ, Granduciel’s voice the one seemingly grounded aspect of its nebulous din. There’s a similar sonic layer cake built up in “A Needle In Your Eye #16”, though in this instance, the Springsteen-isms and psychedelic noise merge beautifully, rocking with grit and sweat, and a chaotic background of overdriven organ.

No matter how much noise, white or otherwise, The War On Drugs kicks up in each song, they’re, at heart, more of an honest-to-goodness rock `n’ roll band than anything else. It may be a while before this album makes its way into regular dive bar jukebox rotation, but once it does, I’ll make damn sure I have enough quarters.

Check out these tracks: Taking The Farm; There Is No Urgency and Arms Like Boulders.

This LP on black vinyl with printed inner sleeve and digital download is pressed in the USA. 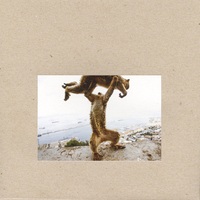