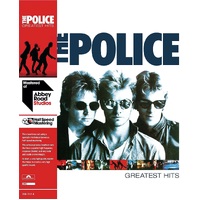 Greatest Hits is a compilation album by English rock band The Police, originally released in September 1992 via A&M Records.

This album also includes two album tracks that weren’t released as singles in the UK, “The Bed’s Too Big Without You” and “Tea In The Sahara”.

To celebrate the albums 30th Anniversary it is being released on vinyl with audio that has been mastered at Abbey Road Studios using the half speed mastering process.